Freezing in the New Year

Published on January 7, 2015 by Wendy Burch
Share this on social media:

It's January...and more than half of the United States is freezing (as in cold, shivering and shoveling). As I sit here on my deck in sunny Southern California—where the expected high today is 75 degrees—I too, am thinking about freezing: only my frozen thoughts involve your eggs.

The New Year is all about resolving to take a new approach...so it only seems fitting that women, who are concerned that their eggs may getting old, do something about it.

Egg-freezing is a hot topic after both Apple and Facebook announced recently they will cover the cost of egg-freezing treatments for their female employees who want to delay having children (up to $20,000). This wasn't an option back in the day when I was in my 20's and early 30's (namely because I didn't work for Apple, and Facebook didn't exist). Also, egg-freezing was still considered 'experimental' back then. Sure, the basic technology has been around since the mid-80's, but much has changed in the way of the process that is used to actually "freeze" the eggs.

About 10 years ago, someone came up with the cool idea of cryo vitification. Think of it as a "flash-freeezing" technique that allows the delicate eggs to be frozen quickly enough to prevent damage. Which means, years down the road, when you are ready to thaw your eggs for use in an IVF cycle, not only haven't they aged, they also haven't cracked. (and by-the-way, The Southern California Reproductive Center was one of the first places in the country to put this practice into place). The new technology of vitrification (flash freezing) has been a paradigm shift in the way that not only eggs but also embryos are now frozen worldwide with thaw recovery rates approaching 100%.

It was a game-changer in baby-making. And success rates have gotten so good, that the FDA no longer considers egg-freezing experimental.

But egg-freezing still comes at a price. It cost around $10,000 to harvest your eggs from your ovaries. And you will have to spend around $3,000 more on the drugs you will take for several weeks to put your egg production into hyper-drive. Then, the eggs need to be frozen and stored at a cost of about $500 a year. And of course, down the road...thawing, fertilizing and transferring the eggs into your uterus with IVF will cost about $5,000.

Is it worth the investment?

Well, take it from someone who spent five years going through fertility treatments and spent at least $50,000 dollars (I stopped counting after that). In the end, I decided to use a donor egg (which cost another $10,000). And none of that takes into account the emotional toll all of this took (which required more than its fair share of professional and retail therapy).

Sure, I was struggling financially when I was in my late 20's and early 30's. But I'm sure I still spent plenty on fashion, fitness and overall frolicking. After all, I believed Mr. Right was right around the corner, and I better look damn good when I ran into him.

So, if I could turn back time, what would my 45-year-old-self tell my 30-something self if she was standing in front of me today? Return the designer handbag, postpone the vacation to Europe, quit feeling bad about the guy that gave you the cold shoulder and GO FREEZE YOUR EGGS. Also, apply for a job at Apple or Facebook.

If you are interested in learning more about Egg Freezing or meeting others who are please join SCRC for an upcoming #EggSocial Event. Find event dates here: http://www.eggsocial.com 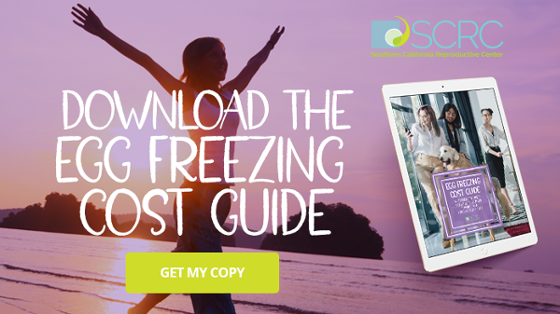