Is That a Wrinkle or a Twinkle in My Eye?

Published on June 10, 2015 by Wendy Burch
Share this on social media:

My girlfriend just mailed me her son's high school graduation announcement. She and I are the exact same age. Her kid is going to college. I just enrolled mine in a tummy time class. It got me thinking about how old I will actually be when my son parades in his cap and gown. I gave birth to him just three weeks shy of my 46th birthday. Any way you add it up, I will likely be voted the “Oldest Mom of the Class”.

That is, unless I move to Germany.

Why? That's where Annegret Raunigk lives. She's 65. She's a grandmother. She also just gave birth to quadruplets. Yes. You read that right. That would be four more kids to add to the 13 she already had (and let's not forget her seven grandchildren).

Now, I am by no means advocating that you get an AARP card before you get around to having a baby. In Raunigk's case, she got pregnant through in vitro fertilization and she used fertilized eggs. The single mother did the same things 10 years ago when, at age 55, she gave birth to a daughter. Apparently, it was that little girl's wish to have a younger sibling that encouraged her mom to try again. Now that little girl has a kid sister and three kid brothers...and her mother holds the record as the oldest woman to ever give birth to quadruplets.

Be careful what you wish for.

But don't stop dreaming about having a baby, either (unless you need a geriatric specialist to refer you to a pediatric one).

For older women, IVF procedures can work wonders (and in Germany, even miracles). However, don't kid yourself. Even if you feel you are aging gracefully, you still need to have a sufficient supply of eggs...and they need to be good ones. The best eggs? You guessed it. They are the young ones. According to Dr. Mark Surrey of the Southern California Reproductive Center, "Egg quality translates to embryo quality, which is by far the most important factor in determining if IVF is effective. The genetic content of the embryo determines its ability to produce a normal pregnancy."

And although I would like to believe that age is nothing but a number. Truth is: IVF success rates using your own eggs begin to drop in the late 20s. They drop faster in the mid 30s...and nearly fall off the charts in your early 40s.

But there is very little drop in success rate when using donor eggs.1 Most donors are in their 20's (mine was 21) — so the 'egg age' is excellent. Combine that with an older woman who's healthy, with a fully-functioning uterus, and you've got yourself a pretty good chance of getting pregnant.

I thought about that as I looked at a selfie I took with my son just days after he was born. It's one of my favorite photos of the two of us. His head, on my chest, in the bad lighting of my hospital room. The photo is unfiltered. You can see every wrinkle in my face...but you can also see a twinkle in my eye. 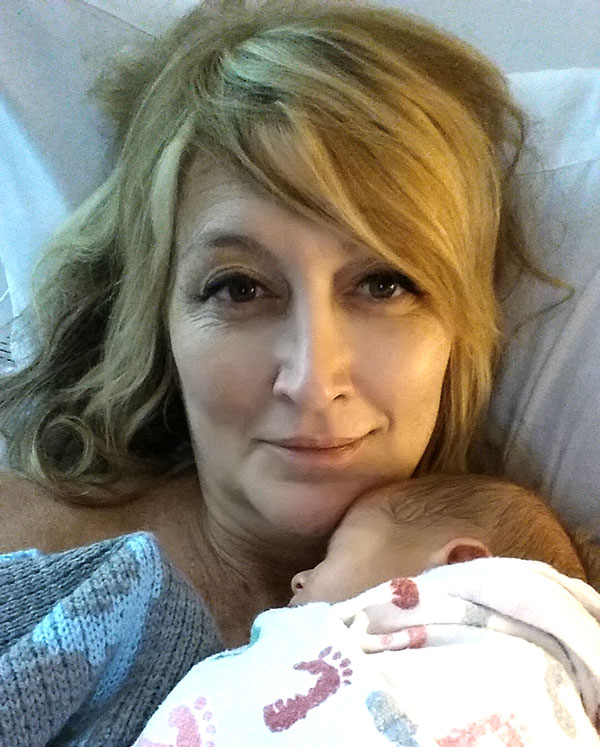 It's going to be the first picture in the 'yearbook' I'm putting together for my baby boy. If my maternity ward were a high school, I would definitely be a senior—who was 'held back' a few years for one reason or another. But I'm now proud to be a part of the IVF graduating class. Wrinkles and all.