Published on September 22, 2016 by Jenn and Peter
Share this on social media: 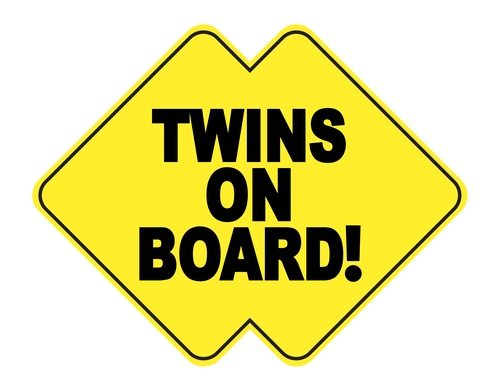 Well, we are pregnant. This we know.

That written, is it a singleton or a starting five in there? We transferred two embryos. That means the math can go a lot of ways. Two can equal one. Two can equal two or three or four. With my first Beta test being 760 most people wouldn't put their money on a singleton.

The wait period was kind of funny actually. Everybody started making predictions. And all of those predictions were the same: twins. I would turn on Dr. Phil and his show was about twins. Peter was in a elevator with a pregnant woman and she said she was having twins via IVF. "My doctor transferred two embryos," she said. Twins the movie was on TV.

As you can imagine we were overwhelmed at the thought of two at once. I know some women dream of having twins but I am not one of them and Peter definitely wasn't excited at the thought either.

"If the average cost of raising one child up until age 18 for a middle-income family in the U.S. is approximately $245,340 (or $304,480, adjusted for projected inflation), according to the latest annual “Cost of Raising A Child” report from the U.S. Department of Agriculture, then this isn't insignificant," Peter would mutter as he walked around aimlessly.

Fear is what I felt

How am I going to take care of two little ones at the same time? How will I breast feed, sleep train, change, etc.? How in the world would I do it alone during the day while Peter is at work with no help? Peter was wondering how we were going to avoid living in a cardboard box. He already got a second job for a second kid.

Well the day came and Peter knew what the outcome was going to be. I think I even saw him weeping a little bit in the corner (he says it was just allergies). I was still sure there was only one.

We have two precious babies growing. After the initial fear wore off, which definitely took some time, we are actually very excited that our babies will each have a best friend for life. And this mommy to be is going into this knowing that she can handle this! The horror stories of "it's so much work" and "you won't remember their first few years" isn't getting to me at all. I know it will be challenging, but I have waited my whole life to be a mommy. It's truly a double blessing.