Published on January 24, 2017 by SCRC Contributor
Share this on social media: 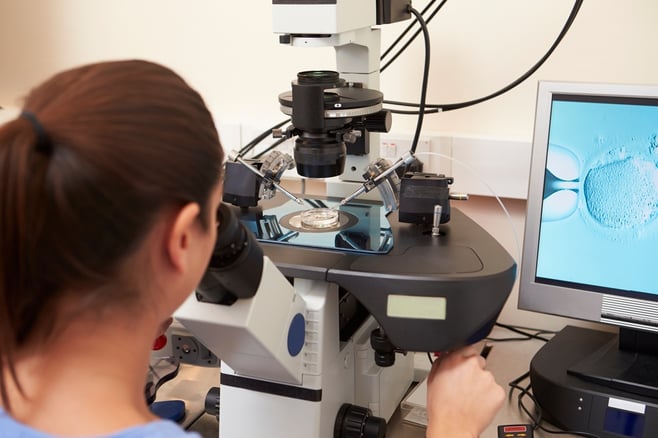 We talk a lot about in vitro fertilization (IVF) here on the blog, but it is only one of the fertility treatments available to patients who need help conceiving. The list of assisted reproductive technology (ART) options offered by fertility clinics includes several less invasive and less expensive treatments which may be tried before a patient moves on to IVF.

Depending on your specific diagnosis, one or more of these options may be a part of your fertility treatment plan. Intrauterine insemination (IUI) is a much simpler and easier process than IVF, and it may be a good starting point for many patients who have not been able to get pregnant on their own after a year or more of trying.

In IUI, a sperm sample from the male partner or a donor is “washed” and prepared in the lab.This concentrated sperm sample is then placed directly in the woman’s uterus via a tiny catheter. This allows the maximum possible number of sperm to reach the fallopian tubes, increasing the likelihood that one will successfully reach and fertilize an egg. IUI removes many of the barriers to conception because it allows the sperm to bypass the cervix.

This essentially means that the sperm has a meaningful head start and will not be slowed down or stopped in the lower parts of the reproductive tract. IUI may be timed to a woman’s natural ovulation cycle, or it may be used in conjunction with fertility drugs which stimulate the ovaries to release one or more eggs “on demand.”

Depending on the causes of a patient’s infertility, the age of the female patient, and whether fertility medications are used, IUI can have a success rate of about 5% to 15% per cycle.

When is IUI a good choice?

There are many reasons why IUI may be indicated as a valuable fertility treatment.

In cases of male-factor infertility, it can be a highly effective option. Issues with sperm quantity (low sperm count) quality (low motility or mobility) are a very common cause of infertility, and IUI is often a good solution to these problems. IUI allows doctors to choose the healthiest sperm from a sample and removes common obstacles that may prevent sperm from meeting the egg. Some men have issues with ejaculation. Being unable to ejaculate in spite of stimulation through masturbation or intercourse is known as anejaculation: depending on the cause of the problem, a sperm sample can sometimes be obtained through medical intervention and used for IUI.

IUI is often used to aid conception for same-sex couples, either with donor sperm for a female couple, or using a father’s sperm with a gestational surrogate for a male couple.

Are you a good candidate for the intrauterine insemination process?

Understanding whether IUI is right for you depends on getting a solid infertility diagnosis. A full panel of tests should be carried out on both partners to help identify where the problem lies and whether IUI is a viable solution.

For women, this means a full workup of blood tests and ultrasounds, along with a thorough medical history.

For men, a semen analysis is fundamental, and some states require blood tests to screen for sexually transmitted infections which could be spread through IUI. For IUI to have a good chance of working, there are several basic requirements which must be met:

A woman is a good candidate for IUI when she:

A man is a good candidate for IUI when he:

What is the IUI procedure?

In contrast to the IVF process, IUI can be considered a relatively non-invasive intervention. However, it is a multi-step process, and if fertility medication is used to induce controlled ovarian hyperstimulation, there may be a chance of some similar side effects. Generally, the doses of hormone medications used with IUI are lower than those used for IVF, so the risk of side effects is correspondingly lower.

Step one: Fertility medications are begun.

The chances of IUI being successful are much higher when it is used together with fertility drugs to stimulate the ovaries to create multiple mature follicles which will each release an egg at ovulation. This helps because it allows for accurate timing for the IUI and because having more than one egg mature at a time increases the chances of fertilization. Usually the patient will take Clomid® pills or self-administer injections of the fertility medication gonadotropin. If you are using an injectable medication, your clinic will show you and/or your partner how to give you the shots.

Blood tests are used to measure estrogen levels and ultrasounds are used to keep an eye on the developing follicles. This monitoring allows the doctors to adjust dosages of the fertility medication and to see how close the eggs are to maturation. Using these medications with IUI can increase the risk of a multiple pregnancy (twins or more) so your doctor will check to make sure that only a reasonable number of follicles are maturing: generally the goal for an IUI cycle is somewhere less than four. (This is in contrast to an IVF cycle where the goal may be ten or more.)

When the monitoring shows that at least two or three follicles are mature, you will receive a “trigger shot” of the hormone hCG (human chorionic gonadotropin), also known as Ovidrel®. This injection will induce ovulation, where the follicles release their eggs. Ovulation will usually occur between 24 and 40 hours after the injection.

Step four: The sperm sample is prepared and the IUI procedure takes place.

The 24 - 36 hours after the trigger shot, you will return to the clinic. A sperm sample is collected from the male partner and taken to the lab. If frozen donor sperm is being used, it will be thawed before preparation The preparation of the sperm sample is often referred to as “sperm washing” but is actually a process where the sperm is removed from the man’s natural seminal fluid, known as seminal plasma.

This process has a few purposes. Seminal fluid contains high concentrations of naturally occurring chemicals and hormones, including a group of chemicals known as prostaglandins. If high concentrations of prostaglandins are placed directly in a woman’s uterus, they can cause adverse reactions such as nausea and cramping. Separating the sperm from the seminal fluid prevents this problem. The sperm sample is mixed with a special non-toxic culture media and then placed into a centrifuge which spins it at a high speed, allowing all the healthiest sperm to be collected, ready for insemination. This concentration of the healthy sperm also raises the chances of fertilization. The entire process takes between 30 minutes to two hours, depending on which methods are used.

Later that same day, the IUI procedure is performed. The prepared sperm are placed into a syringe attached to a very thin, flexible catheter, which is passed through the cervix into the uterus. Once the catheter is in place, the doctor will press the plunger on the syringe, causing the sperm sample to flow through the tube into the uterus. This is a minor procedure which causes minimal discomfort (comparable to a pap smear), so no anesthetic is needed. The entire insemination procedure takes about five minutes.

You may feel some slight cramping, and some women prefer to take the remainder of the day off to rest. While bed rest is not indicated and there is no medical reason why you should not resume normal activities after the IUI procedure, the stress and excitement of undergoing fertility treatment can take a toll. If you can afford to be gentle with yourself on the day, a little extra self care is always a good idea. You may notice a small amount of fluid leaking over the next day: sometimes a little bit of the fluid used in insemination can leak back out through the cervix, known as reflux. This can occur due to mild uterine contractions but is not something to worry about and should not affect the result of IUI. You may be given progesterone supplements to take for the first few weeks after insemination to support a possible early pregnancy.

After the IUI procedure, there is usually a two-week wait before a reliable result can be obtained from a pregnancy tests. There are two reasons for this. The first is that the use for fertility medications can cause a false result before they have passed through the woman’s body. This is particularly true of the hCG trigger shot.

The hCG hormone is the same hormone that gives a positive result on a pregnancy test, so an artificially elevated hCG level from the shot can produce a false positive. Whether or not a trigger shot was used in the IUI process, it usually takes 10 to 14 days for the natural levels of hCG caused by pregnancy to climb high enough to register on a pregnancy test. Generally, after positive home pregnancy test patients will see their specialist for blood work (beta HCG) level. If the beta HCG level is appropriately elevated then the ultrasound can be scheduled 1.5 - 2 weeks after the positive pregnancy test. Once a pregnancy is confirmed, you will usually stay under your fertility clinic’s care until 10 to 12 weeks, when you can switch to a regular OB practice.

IUI is a great option for many people, but it isn’t for everyone. The reduced cost and complexity of IUI means that many patients prefer to begin with this treatment, but its success rates are lower than other options like IVF. This means that some patients will prefer to go straight for the treatment with the highest possibility of pregnancy. For some patients, the time, money, and stress consumed by multiple failed cycles of IUI may be better invested in an IVF cycle.

Every patient’s path through fertility treatment is unique, and deciding on a personalized plan of action with your fertility team is an ongoing process. Starting with a good working diagnosis is key, and understanding all the options available to you can help you navigate the often confusing world of infertility.

If you are looking to explore your fertility options, set up a time to speak to our Beverly Hills fertility specialists.