IVF Follicles: How Many Do You Need for Success?

Published on November 28, 2017 by SCRC Contributor
Share this on social media: 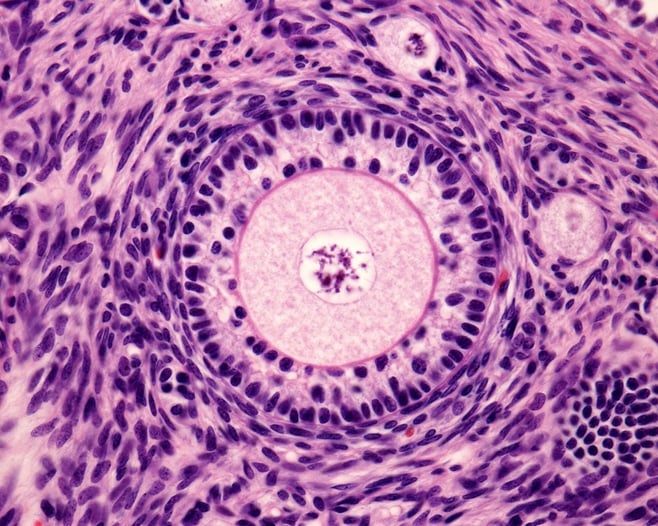 When a woman is born, her ovaries already hold all the potential eggs she will have in her lifetime. Over the years, many of these eggs are lost through natural cell death and through a process called atresia, where roughly 15 to 20 immature follicles in the ovaries “compete” to mature and release an egg during ovulation. All the unsuccessful follicles are reabsorbed into the body. This process accelerates as we age, until the ovaries stop releasing eggs and we enter menopause.

Many patients who need help conceiving are concerned about their ovarian reserve, or how many eggs are left in their ovaries. Diminished ovarian reserve, whether caused by natural aging or by the approach of premature menopause, is one of the leading causes of infertility in women. It can also be a big factor in how likely IVF is to work for a patient. Understanding how the ovaries work and how your ovarian follicles affect your chances of IVF success is a key part of choosing a fertility treatment plan with your doctor.

What are follicles and why are they important for IVF?

Follicles are small sacks in the ovaries, filled with fluid, in which eggs are matured. Ovulation happens when the follicle sack bursts and the egg is released. In a regular cycle, usually only one egg makes it to full maturation and is released. In an IVF cycle, however, ovarian stimulation medications such as follicle stimulating hormone (FSH) are used to encourage the ovaries to mature more eggs all at once. More eggs mean more chances for fertilization in the lab and eventual pregnancy after an embryo transfer.

Follicles go through various stages over their lifetimes. There are two stages of follicles which are important in the IVF process:

How many antral follicles should there be for a good response to IVF?

Unfortunately, there is no magic number: every woman’s body is unique and so is her response to ovarian stimulation. There are other factors which can affect whether or not a cycle is successful. Additionally, counting antral follicles is not an exact science. Depending on the experience level of the ultrasonographer, the final count may vary. One technician may count 5, while another might see 6 or 7. As a general guideline, however, antral follicle counts can be used to help determine the likelihood of success for ovarian stimulation and IVF, and may also be used to guide dosing for fertility medications. 15 to 30 is considered a good number.

How many mature follicles should there be before triggering ovulation for IVF?

As we know, antral follicle counts are a useful indication of IVF success, but it’s the final number of mature follicles after stimulation that tends to determine how many eggs are available for fertilization. If the follicles fail to mature, the cycle may be cancelled before the egg retrieval process.

Once again, though, there is no magic number, and this is a very individual situation. Follicle quality is as important as quantity here. Some patients go forward with very few follicles, but the egg quality is high enough that fertilization and embryo transfer is successful. Too many can also be a problem. If a patient has 30 or more mature follicles they could also need to cancel a trigger shot and the IVF cycle if the fertility specialist feels that there is a risk of severe OHSS.

Overall, while follicle counts are useful tools in the IVF process, they are not the end of the story in regards to IVF success. A woman with a high antral follicle count may not end up with viable eggs due to issues with overstimulation or a secondary complicating condition, while a woman with a low antral follicle count could end up with a successful cycle, because while more eggs are better, just one can sometimes be enough. Choosing whether or not to move forward with an IVF cycle based on the number of antral or mature follicles seen on the ultrasound is a decision that only you and your doctor can make.

If you are concerned about your ovarian reserve and whether you’ll have enough follicles for IVF, don’t wait to talk to a fertility specialist. There are many fertility tests for women which can help give you a picture of your reproductive health and status, and some are covered by insurance because they are diagnostic. Information is power, and scheduling a fertility checkup before you plan to start trying for a baby is one of the best things you can do for your reproductive future.